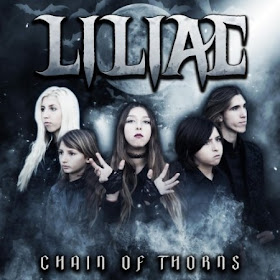 If you live in the Los Angeles area particularly Santa Monica, you may have seen them kicking out the jams on the boardwalk. Maybe you've seen them on "World's Best" on television. I'm talking about the Metal band, Liliac. A young Heavy Metal band made up of 3 brothers and 2 sisters. Melody on lead vocals and bass, Sam on lead guitar, Ethan on guitar,  Abby on drums and Justin on keyboards. The thing that really sealed the deal for me was watching their video of them covering Dio's "Rainbow In The Dark". Wow! I was blown away. If you haven't yet,  I highly suggest checking out their YouTube videos, Liliac are the real deal. The cast of musicians is superb, the effort and quality is evident.  I know the idea of a bunch of teens playing hard rock music may seem phony at first, but I am here to let you know, these teens can rock out with the best of them. That is exactly what the band do on their six song debut Ep, 'Chain Of Thorns'. All six tracks are great from the opening, "Chain Of Thorns", to "Hit The Lights", the production is solid. The musicianship and Melody's powerful vocals combine for an awesome metallic wall of sound. Overall, 'Chain Of Thorns' is a very impressive debut and great introduction to a band that have a very promising future. Liliac are going to be around for a while as they have real talent. So do yourself a favor and support this band as they are keeping Heavy Metal music alive!   - Tony @ The Dedicated Rocker Society
Dedicated Rocker Society at 9:18 AM
Share