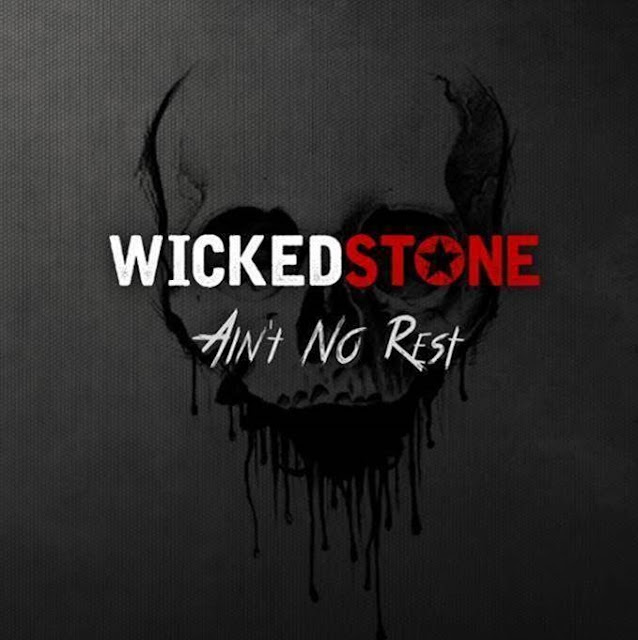 'Ain't No Rest', the powerhouse debut release from the UK based Wicked Stone is a adrenaline pumping audio thrill ride that is packed with songs powered by guitar riffs that will grab you, give you a good shaking and won't let go, and nor would you want them to! Formed in 2015, Wicked Stone are, Joe Hawx on vocals, James Forrister on guitars, James Amos on bass and Olly Smith on drums. This album just goes for the throat from start to finish, excellent guitar work, hard pounding drums, and strong solid vocals to boot, not this cookie monster stuff that many new "metal" groups are putting out. Highlights include, "Ain't No Rest", "One Time", "Get In Or Get Out", "Rattlesnake" and " Set Me On Fire". The musicianship is very solid, genuine, and impressive. Joe Hawks' vocals are impressive and downright awesome, and with James Forrister, cranking and riffing out heavy, crunching riffs and fantastic solos that will make the hair on the back of your neck stand. James Amos does some nice work with his bass, and drummer Olly Smith pounds out some rocking fills that will get you in that rocking mood.  Overall, if you enjoy hard rock, heavy metal, alternative metal, whatever, then you'll definitely be impressed with what Wicked Stone has created and delivered with this release is indeed pure hard rock for the ages. Wicked Stone is exactly what rock music needs right now.  - Tony @ The Dedicated Rocker Society
Posted by Dedicated Rocker Society at 11:18 AM No comments: 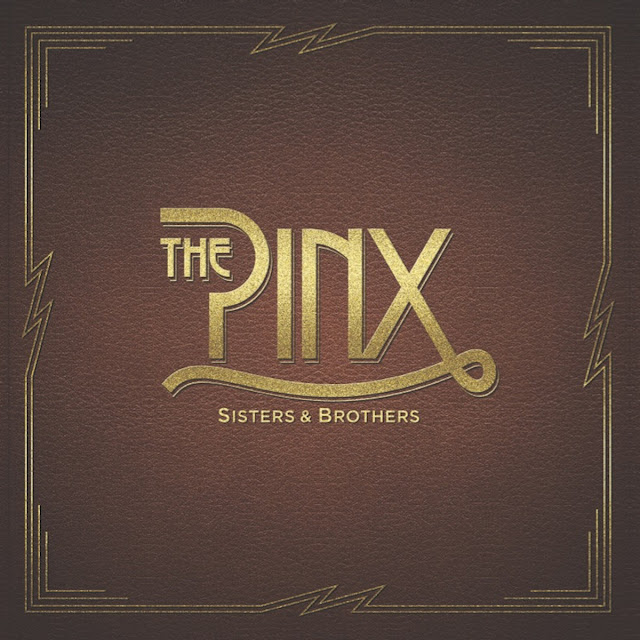 The Atlanta, Georgia based rockers, The Pinx are back with their third release, 'Sisters & Brothers' a album that is filled with roots-based rock ‘n’ roll that has a strong connection to early, soulful blues played with a naturally primal energy and a raw rock feel. The sound here feels pure, unadulterated, with a very clean, hard-edged live-in-the-studio aura. The Pinx are compromised of, Adam McIntyre on lead vocals, guitar, backing vocals and percussion, Chance McColl on guitar and backing vocals, Jonathan Lee on bass, backing vocals, lead vocals on "All Over Now" and Dwayne Jones on drums. The new album has great songs on it. Each track resounds with their signature blues-rock sound accompanied by Adam McIntyre's bluesy vocal swagger. This is one of the most talented vocalists of recent memory. Clearly, he is no solo act, his band mates are easily able to keep pace with him.  This is not music of the moment, but songs with an eternal appeal and played with a passionate immersion. Album highlights include, "Mercy", "Time & Trouble", "Magic Touch", "Daughter Of The River" and "Sisters & Brothers". There is a freshness to the songs that give them a magical type quality when the music is coming out of your speakers. Overall, 'Sisters & Brothers' is a great album from a band that is absolutely worth paying attention to. The Pinx with this release continue to evolve their sound and refine their rock sound. With definite roots to bands of the past, this album really pushes the band forward with a new sound and feel that still fits well within what rock and roll fans want to hear making for an unforgettable sonic experience.  - Tony @ The Dedicated Rocker Society
Posted by Dedicated Rocker Society at 9:11 AM No comments: 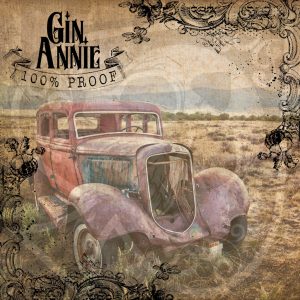 UK based five piece rock outfit, Gin Annie is a very refreshing melodic hard rock band in today's rock music scene. The band's debut as titled, is '100 % Proof' pure guitar powered rock that is high energy from start to finish. The band is comprised of, Dave Foster on vocals, Byron Garbett on guitars and vocals, Brian Green on guitar and vocals, Phill ‘Hammer’ Burrows on bass and Jack Ryland-Smith on drums. Strong, groovy riffs; Classic pounding drums, and strong Vocals. The band's influences are definitely worn on their sleeves but a great modern edge too. Their debut album has no filler; it's all melodic hard rock goodness from start to finish. Highlighted by such killer tracks like, "Love Ain't Here", "Dead & Gone", "New Bad Habit", "Fallin'" and "Born To Rock N' Roll", but you could pop this bad boy in, hit play at any point and find a killer track. The bottom line here is the music is great, the vocals amazing, and the lyrical subjects different from all the teenage angst in the hard rock scene today. If your album collection needs a injection of new life in it, then go out, and check out Gin Annie, this band deliver the goods. Highly recommended to any rock music fan and a amazing new band that has a great future ahead of them.  - Tony @ The Dedicated Rocker Society
Posted by Dedicated Rocker Society at 9:24 AM No comments: 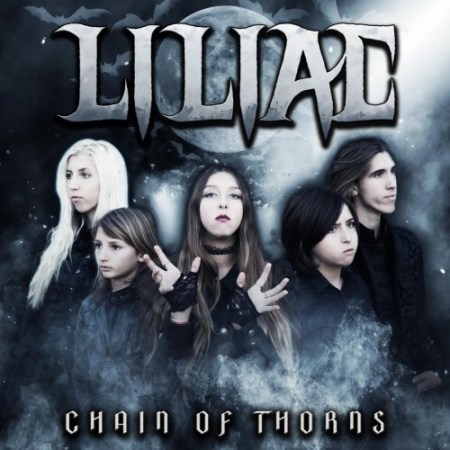 If you live in the Los Angeles area particularly Santa Monica, you may have seen them kicking out the jams on the boardwalk. Maybe you've seen them on "World's Best" on television. I'm talking about the Metal band, Liliac. A young Heavy Metal band made up of 3 brothers and 2 sisters. Melody on lead vocals and bass, Sam on lead guitar, Ethan on guitar,  Abby on drums and Justin on keyboards. The thing that really sealed the deal for me was watching their video of them covering Dio's "Rainbow In The Dark". Wow! I was blown away. If you haven't yet,  I highly suggest checking out their YouTube videos, Liliac are the real deal. The cast of musicians is superb, the effort and quality is evident.  I know the idea of a bunch of teens playing hard rock music may seem phony at first, but I am here to let you know, these teens can rock out with the best of them. That is exactly what the band do on their six song debut Ep, 'Chain Of Thorns'. All six tracks are great from the opening, "Chain Of Thorns", to "Hit The Lights", the production is solid. The musicianship and Melody's powerful vocals combine for an awesome metallic wall of sound. Overall, 'Chain Of Thorns' is a very impressive debut and great introduction to a band that have a very promising future. Liliac are going to be around for a while as they have real talent. So do yourself a favor and support this band as they are keeping Heavy Metal music alive!   - Tony @ The Dedicated Rocker Society
Posted by Dedicated Rocker Society at 9:18 AM 6 comments: 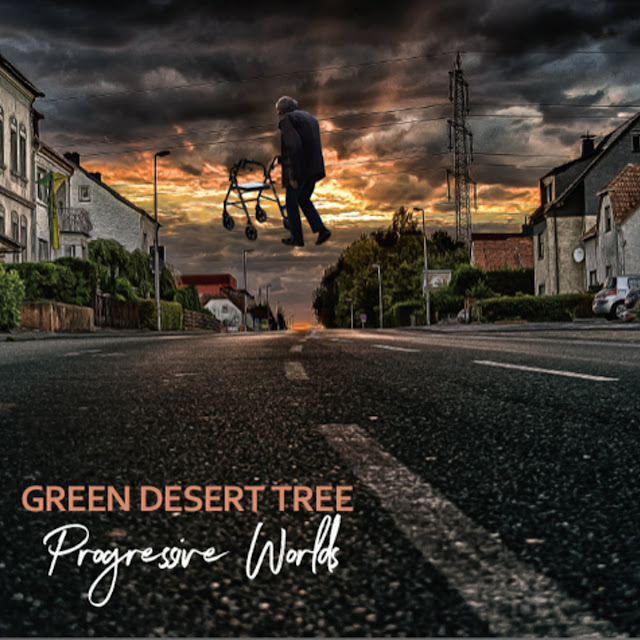 Berlin based prog rockers Green Desert Tree are truly an amazing band for this time and space - unafraid to mix heavy and ethereal to create musical masterworks that harken back to the early and mid-'70's when it was acceptable for rock bands to include mellow material without being pummeled with rotten produce. This is the fault of the music industry's penchant for extreme categorization that restricts creativity and promotes blandness on a major scale. Green Desert Tree are here to change that with their amazing debut release, 'Progressive Worlds'. Comprised of, Timo Enders on vocals and guitar, Tim Sund on keyboards and synthesizers, Simon Rainer on guitar,  Alex Will on bass and Jonathan Gradmannn drums. The band presents an exciting, multi-layered and multifaceted conceptual piece that simmers, burns and caresses, while leaving you wanting more. Providing a musical excellence, and creating a kind of ethereal atmosphere ; will take one on  a wonderful trip full of sounds and lyrical content without sounding forced or rushed. These talented musicians are nuanced, they explode where necessary but they can also play with the most exquisite precision and delicacy where the song demands it. Album highlights include, the epic ,"Progressive Worlds", "Cure For Change", "The Beast Of Prey" and "Devil in Disguise". Green Desert Tree definitely sets a new prog-rock standard with, 'Progressive Worlds', a beyond brilliant progressive rock recording that perfectly combines elements of Genesis, Marillion, Porcupine Tree, Saga and Yes.  I highly recommend them to anyone with an interest in progressive rock or to the merely musically adventurous. - Tony @ The Dedicated Rocker Society

Posted by Dedicated Rocker Society at 12:51 PM No comments: