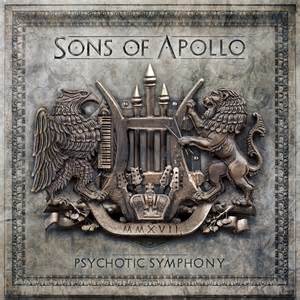 PSYCHOTIC SYMPHONY by Sons Of Apollo
(Inside Out Records)

In Greek mythology, Apollo was the son of Zeus and Leto, twin brother of Artemis. He was the god of music. Every Greek God had human offsprings and in the case of Apollo his demigod offspring have formed together to become the Sons Of Apollo. The new intense progressive rock band that features Mike Portnoy (The Winery Dogs, Transatlantic, ex-Dream Theater), Derek Sherinian (Black Country Communion, ex-Dream Theater), Ron "Bumblefoot" Thal (ex-Guns N' Roses), Billy Sheehan (The Winery Dogs, Mr. Big) and Jeff Scott Soto (Trans-Siberian Orchestra, ex-Journey).  Together these talented musicians have created one of the most intense progressive rock recording you will experience with their debut outing, 'Psychotic Symphony'. Serving up a brand of progressive rock that is a demonstration of talent that very few artists can achieve. This album encompasses their commitment to music using many different styles that influence their unique sound. The writing, the riffs and the songs are all great The album opens with the epic eleven minute plus opus, "God Of The Sun", right off the bat my senses were bombarded with musical intensity. An intensity that did not let up as the next two tracks "Coming Home" and "Sign Of The Times" blasted out of my speakers. Other highlights include, "Labyrinth", "Alive", "Divine Addiction", a track to me is Deep Purple ('Perfect Stranger' era) on overdrive. For the prog rock freaks out there (like myself), the band closes out the album with "Opus Maximus", that clocks in at a little if ten minutes. I understand that when it comes to Progressive Rock music, it's not for everyone. But to those who get it, this album is truly masterclass. The Sons Of Apollo have truly delivered a work of art here. Everyone is involved on this album to a great degree and the production is exceptional.  My hat goes off to the Sons Of Apollo on this amazing and powerful debut album. - Tony @ The Dedicated Rocker Society
Posted by Dedicated Rocker Society at 10:30 AM No comments: 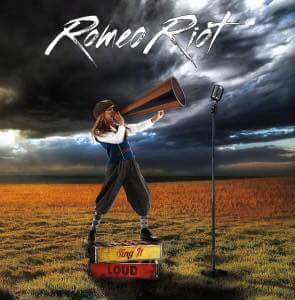 'Sing It Loud' the debut release from America's newest "Super Group", Romeo Riot is a premium blend of melodic rock. Even the lyrics, so often the downfall of melodic rock albums, begs repeated listens. Romeo Riot is comprised of Mark Giovi on lead vocals (Former Vocalist of Farcry - High Gear and Optimism albums), Erik Johnson on guitars and vocals (Bombay Black), Scott Miller on guitars (Tango Down), Ty Sims on bass (Bombay Black) and Jace Pawlak on keyboards and vocals. Stand out tracks? Almost impossible to pick given the high standard of songwriting, performing and production but, "Room To Run", "Streets Of Babylon", the title track, "Twist Of Fate" and the album closer " Best Night Of Our Lives" would be my choices if pushed.  I will say this, the songs on this album are some the best melodic rock songs I've heard this year. Instant sing along songs that you'd call your friends and put your phone to the speakers and "Check these guys out!" The bottom line is if you're a fan of melodic rock, 'Sing It Loud' by Romeo Riot will take you back to a genre of music often overlooked in this day and age. It is filled with songs that have great hooks, rocking guitars, and big, well sung choruses. You will find yourself singing along right from the first listen. Truly a melodic rock masterclass that must be experienced.- Tony @ The Dedicated Rocker Society
Posted by Dedicated Rocker Society at 1:33 PM No comments: 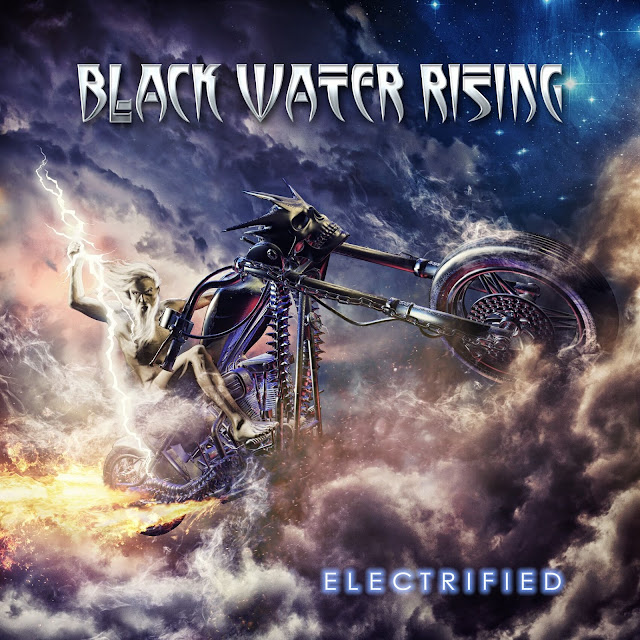 Talk about grabbing your attention right off the bat! The highly anticipated new release from Black Water Rising, 'Electrified', goes for the throat once you press play. There is a depth to this album that is just amazing. It's very much it's own animal and stronger than the band's previous outings. Black Water Rising is powered by Rob Traynor-vocals/guitar, Dennis Kimak- guitar, Oddie Mclaughlin-bass and Mike Meselsohn-drums. Here we have a band that brings hard rock music into a new millennium. Incorporating all we know and love about classic hard rock music. The guitar solos, attention to songwriting detail, strong vocals  and time changes, the band bridges the gap in grand style and at full speed ahead. The album fires off with "Obey", a pulsating shot of adrenaline that is guaranteed to have you rocking out in no time flat. From there its a super charged listening experience with, "The Answer", "Millennial Zombies", "Higher", the title track and the album closer, "World Of Frustration". 'Electrified' is just great all around hard rock album. Awesome guitar riffs and excellent music to just bang your head to.. It's a very visceral and testosterone filled recording. In other words, kicks you in the face and doesn't let up until the end!- Tony @ The Dedicated Rocker Society
Posted by Dedicated Rocker Society at 9:41 AM 1 comment: 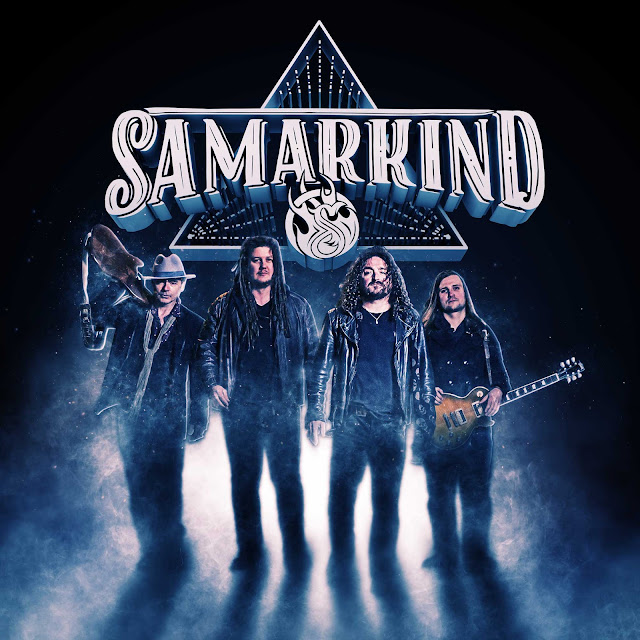 Samarkind is a band that embraces classic blues rock to perfection.  Their self titled debut features a bar-band stomp rooted in the back catalogs of the Rolling Stones, Free, Allman Bros., and any number of early '70s rockers. The band is comprised of,  Irish frontman David Paul Byrne (formally teenage wunderkind singer for successful hard rock band Assassin - a time that saw him tour with Def Leppard, Status Quo, WASP, Manowar and more - and featured vocalist on 80's cult movie 'Trick Or Treat' starring Ozzy Osbourne and Gene Simmons), showcase sublime vocals which are accompanied by the talents of sensational Polish guitarist Michal Kulbaka, Ireland's Mark Dempsey on bass guitar, and South African born drummer Marius Appelgryn.  So, like southern rock? Blues based rock?
If so, this a band definitely worth checking out.  The band serve up a eclectic blend of blues based classic rock that threads throughout the album making it a memorable and rocking listen. Highlights include, "Black Rain", "Sun Stroke Heart", "Thru That Door", "Fire And Blood" and the album closing, "Blue Mountain". Just solid songs great for jammin, cruisin, or just about any time. There is a serious groove in each song that will appeal to any rocker.  All in all, if you like blues based classic rock or just good rock music, Samarkind is worth checking out.
- Highly Recommended
Tony @ The Dedicated Rocker Society
Posted by Dedicated Rocker Society at 10:29 AM No comments: 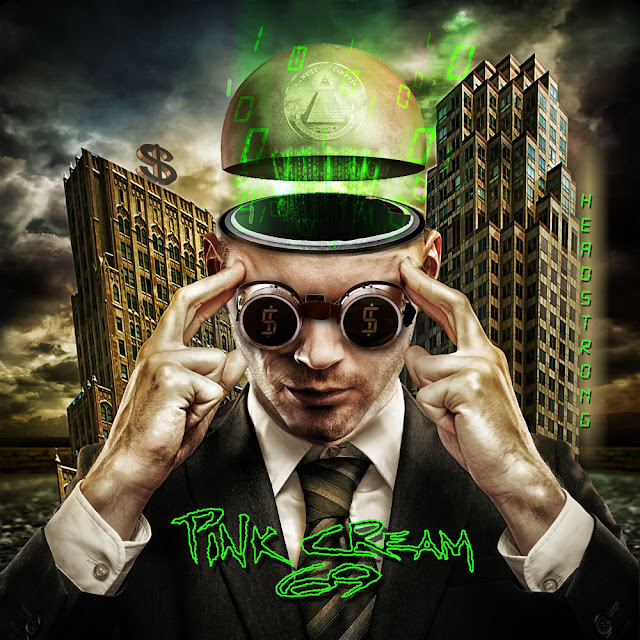 Celebrating their 30th Anniversary, German based rockers, Pink Cream 69 release their twelfth studio album, 'Headstrong'. David Readman on vocals, Alfred Koffler on guitars, Uwe Reitenauer on guitars, Dennis Ward on bass and Chris Schmidt on drums. The new album finds the band once again delivering the goods with a album that is heavy and filled with outstanding guitar riffs and awesome vocal melodies. Just like all their albums, the song quality is solid. And as a special treat, the new release includes a bonus live album featuring songs from across the band’s catalogue.
'Headstrong' is another stellar release from the band.  A band that has remained one of the most underrated acts out there. This is definitely near or at the very top of their discography for me. Great hard rocking songs with very catchy choruses and melodies. It sucks you in right away with the heaviness. Highlights include, "We Bow To None", "Walls Come Down", "No More Fear", "Path Of Destiny" and "Bloodsucker". There's not a song on the album that I don't like. 'Headstrong' is definitely a must-own.  Pink Cream 69 , once again deliver the goods in spades with a album that is hard-hitting, highly-infectious, that totally rocks. There are few bands where I want to listen to the whole album. I can only think of a few that are on that list, Pink Cream 69 is definitely on that list.
- Highly Recommended
Tony @ The Dedicated Rocker Society
Posted by Dedicated Rocker Society at 11:24 AM No comments: 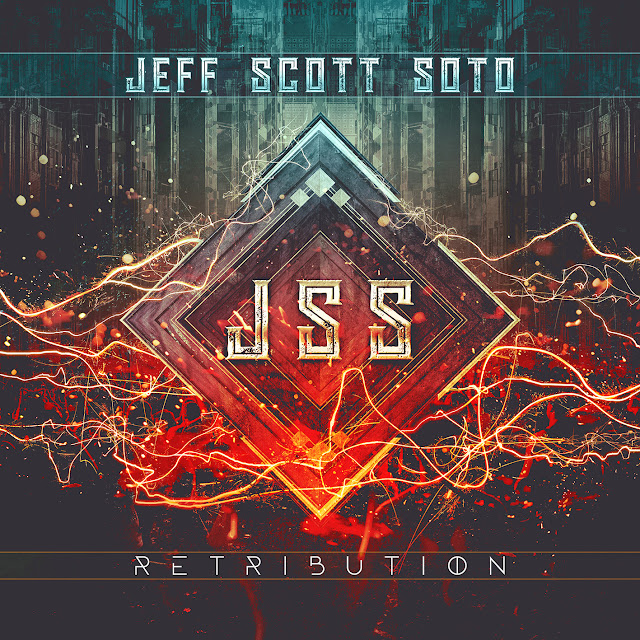 The highly anticipated new release from one of rock music's most versatile vocalist, Jeff Scott Soto, comes to us in the form of, 'Retribution', a premium blend of hard rock music laced with, groove laden huge guitars, hooks and solid  production. Courtesy of Jeff Scott Soto's powerful and passionate vocals and tight as hell musicianship! Provided by guitarist extraordinaire Howie Simon whose amazing guitar and bass playing shines all over this album (except on “Reign Again” and “Song For Joey”). August Zadra and Stephen Sturm on guitars on “Reign Again”, Carlos Costa bass on “Reign Again” and Paul Mendonca guitar, keyboards and bass on “Song For Joey” and Edu Cominato on drums. The new album combines everything that I loved from Jeff's previous solo albums along with the harder, more modern edge, of his last two SOTO releases, 'Vertigo' and 'Divak'. The super charged title track kicks off the album in rocking fashion continuing on with the next two energizing tracks , "Inside/Outside" and "Rage Of The Year". Other highlights include, "Reign Again", "Last Time", "Bullet For My Baby","Song For Joey" and the instant adrenaline rush that is, "Breakout". Quality songs, quality musicianship and excellent production. 'Retribution' is one of those albums that you will enjoy from the first listen. For JSS fans like me, its a must have and a definite contender for one the best rock albums released this year.  - Highly Recommended
Tony @ The Dedicated Rocker Society
Posted by Dedicated Rocker Society at 9:49 AM No comments: 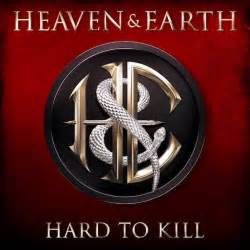 L.A. based, Heaven & Earth return with their highly anticipated new release, 'Hard To Kill'. The new album features a strong 11 song set that is guaranteed to rock your senses in ways unimaginable as soon as you press play! Heaven & Earth is comprised of, Joe Retta (vocals, guitar, harmonica) Stuart Smith (guitar),Ty Baillie (keyboards), Lynn Sorenson (bass, vocals) and Kenny Aronoff (drums). On balance this is a very good album, musically more dynamic than its predecessor "Dig". The songs are structured incredibly well, playing is absolutely top class. What struck me off the bat was the work done to craft each and every song here. Just listen in detail to the fills, complex licks, the way the band works together.  All songs on here absolutely rock!, Highlighted by my personal favorites, "Hard To Kill", "Walk Away", "Bleed Me Dry", "The Game Has Changed" , "Anthem" and "L.A. Blues". The sound is superb, the musicianship is tight and the album simply rocks. If you like classic rock, get your hands on this album. Stuart Smith's masterfully executed guitar techniques and Joe Retta's amazing vocal barrage definitely make this album a must have. Great songs, great playing. 'Hard To Hill', in my opinion, is Heaven & Earth's best album to date. A powerful rock album that shows a band firing on all cylinders.