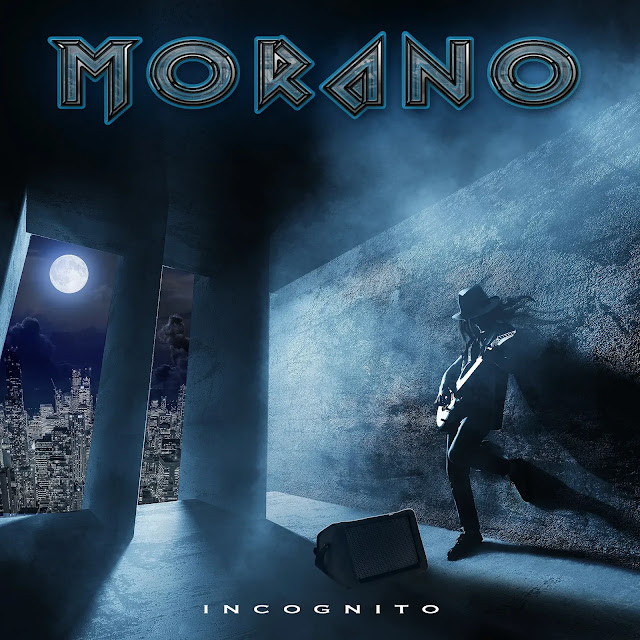 'Incognito' the amazing debut outing project from Duane Morano is a gathering of sheer utter brilliance from all the incredible artists involved. Featuring Duane Morano on guitars collaborating here with the elite of today's melodic hard rock scene such as Danny Vaughn (Tyketto), Terry Ilous (Great White/XYZ), Tony Franklin (Blue Murder/The Firm),  Pat Badger (Extreme) and Nita Strauss (Alice Cooper) among others. The quality and talent of each and every superb musician that plays on it is unequaled. Each track brings together a total uniqueness of their rock talent with a sound and quality that by far outshines ANYTHING out there right now. The production is huge and the musical performances are intense. Highlights include the awesome chorus hook of the energetic opener "After The Love", as well as the adrenaline pumping rockers "Face The Fire" and "Kid Gloves" (featuring Danny Vaughn), "Love Is A Lie", "I Want Love" (featuring Terry Ilous). Bryan Cole from Steel City does a great job on, "Cookie Jar" and "Sincerely Yours". Every detail of the music is amazing! Superbly crafted songs, unbelievable guitar work, soaring vocals, and a perfect production make this album one the best I have listened to this year hands down. What Duane Morano has created here is a album that deliver the goods and will not disappoint, the hardest thing will be for the listener to decide what track to play next and just how many times to listen to it. All in all, powerful performances, tight musicianship, excellent songs and a great guest list; all the above in a package that will make for one memorable listening experience for any fan rock music. - Tony @ The Dedicated Rocker Society
Posted by Dedicated Rocker Society at 2:45 PM No comments: 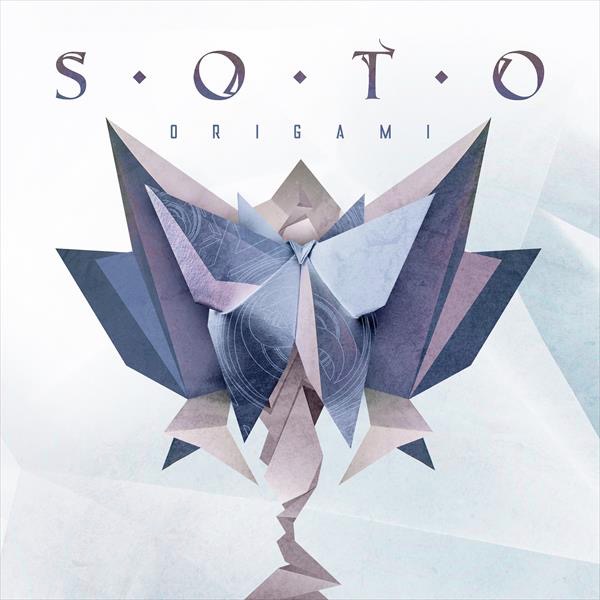 SOTO, the group lead by acclaimed vocalist and current Sons Of Apollo frontman Jeff Scott Soto (ex Yngwie Malmsteen / Talisman / Journey, TSO, W.E.T.) are back with third release, 'Origami', showcasimg 10 tracks of modern, melodic and highly versatile Hard Rock and Metal with addictive songwriting and an infectious level of catchiness. Along with Jeff Scott Soto the band is comprised of,  Jorge Salan on lead guitar, Tony Dickinson on bass, BJ on keys, guitars, and Edu Cominato on drums. The album is the perfect continuation and evolution from the band's previous outings. Taking all the great elements from the first and second albums and combing them into a masterpiece.  Showcasing each member's talents, but it also shows the group's ability to compose complex pieces that take you through an emotional ride during each song. Having multiple levels that evoke different emotions from the listener, yet flow together very nicely from beginning to end. Highlighted to perfection on tracks like, "Hypermania", the adrenaline pumping title track, "BeLie", "Detonate" and a killer rendition of the Michael Jackson penned, "Give In To Me". Jeff Scott Soto's vocal performance is amazing, and he uses his entire vocal range throughout the album. Jorge Salan's guitar work is on point. I always appreciated his work outside of Soto, as they showcase the unique talents that he brings to the band. His solos are blended into the songs perfectly. They are not in-your-face, so to speak, but they are as impressive as ever. The rhythm section of Edu Cominato's drums and Tony Dickinson's bass provides power and darkness to the songs. Overall, I think this is a great album that is appreciated more and more with each listen. It is as creative as it is powerful, as melodic as it is heavy, as epic as their previous outings and yet brings a new color, a new shade to the SOTO canvas. - Tony @ The Dedicated Rocker Society
Posted by Dedicated Rocker Society at 10:36 AM No comments: 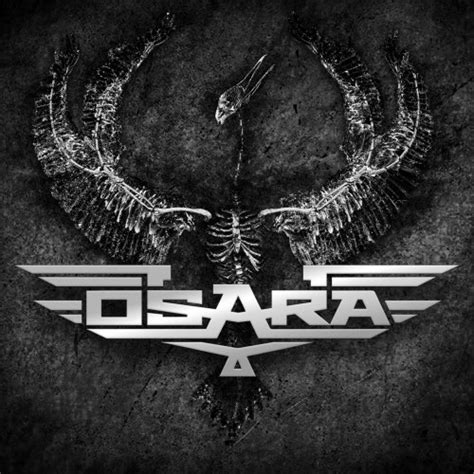 'Apocalypse', the strong debut outing from South Carolina based rockers, Osara, is a hard rocking album that will have your undivided attention as soon as you hit play. There's something both new and familiar about this band. Their influences are definitely worn on their sleeves but with a great modern edge too. To me, they have that Alice In Chains meets Velvet Revolver vibe to them. The band is comprised of, Colton Beasley on guitar and vocals, Lael Silva on guitar, Alex Nolan on bass and Evan Moore on drums. The musicianship is solid, genuine, and impressive. Colton Beasley's vocals are impressive and together along with Lael Silva, they both churn and rip out great heavy, crunching riffs and solos that will give you goosebumps. Alex Nolan  does some nice work with his bass, and drummer Evan Moore pounds out some rocking fills that will get you in that rocking mood. That tight chemistry can be heard on tracks like, "Apocalypse", "Hunter", "On The Mend" and "Quarantine". I have to say after listening to Osara, they are a breath of fresh air. A lot of bands now of days have somewhat of a depressing and violent tone in their music, but these boys just let the music flow with passion and great talent. I see a bright future for these guys. A very impressive debut to say the least. - Tony @ The Dedicated Rocker Society
Posted by Dedicated Rocker Society at 8:30 AM No comments: 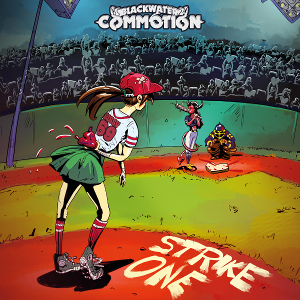 When Finnish rockers, Blackwater Commotion formed in 2012 they wanted to put together a band that they would want to go see. Living by the oath, that all men play on 10. Seven years later, the band release their debut outing, 'Strike One!', staying true their word and putting out a high octane album incorporating the very successful formula and style of AC/DC from start to finish with well written, energetic tracks that are delivered to really kick ass and beg to be cranked to "10". The band is comprised of, Henkka Hako-Rita on vocals, Toni Saari on guitar and backing vocals, Ilkka Uusitalo on guitars, Mika Tikka on bass and Perttu Tähtelä on drums. These guys tear it up and sound like they are having a great time doing it. The energy of their debut starts high right off the bat with the opening song, “Sled Of Coming”, followed by rockers in the form of, "Waiting", "Metal Child" and maintains throughout with tracks like, "You Better Hide Out", "Long Hard Ride" and "Make It Through The Night". One thing is for certain, these boys know how to rock. One simply doesn't sit in heavy traffic listening to a band like, Blackwater Commotion, one buckles up and experiences one a helluva ride!  It's like drinking a quad espresso before going to bed. It's nice to listen to a band that's hard rocking with vocals that don't sound like prostate surgery with no anesthetic..not a bit of guttural growling and with no implications of blood, death or living dead!! Blackwater Commotion have managed to infuse their own energy and flavor to make their musical vibe new and fresh. If you're a fan of good Rock 'n Roll this recording will definitely get heavy play while you workout, jog, drive etc. 'Strike One's by Blackwater Commotion is the soundtrack to your next rocking weekend. - Tony @ The Dedicated Rocker Society
Posted by Dedicated Rocker Society at 5:29 AM No comments:

CD REVIEW: MUSIC FOR GENERATIONS TO COME by Cormada 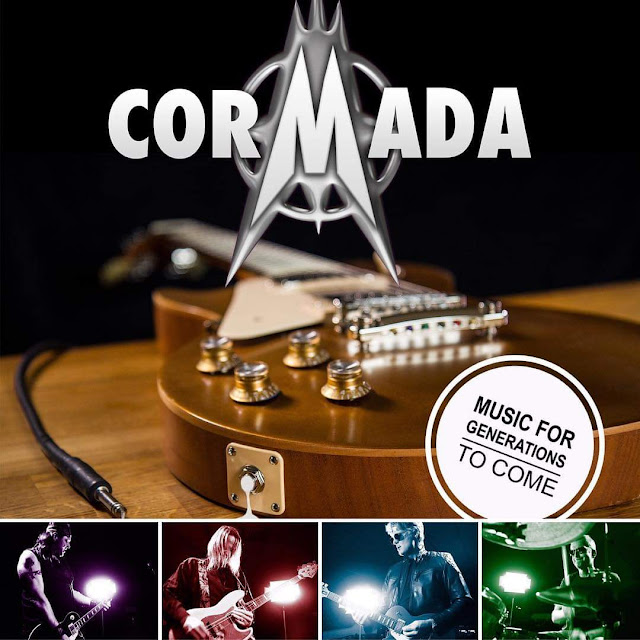 MUSIC FOR GENERATIONS TO COME by Cormada
(Independent Release)

The Swedish based rockers, Cormada break onto the scene with their strong debut outing, 'Music For Generations To Come',  a rowdy package of hard driving riffs, right off the mark, with a couple laid back tunes, combined with solid vocals making for one rocking listening experience. The band is comprised of, Magnus Fallgren on lead vocals and rhythm guitar, Torbjörn Haag on lead guitar, Ken Olsson on bass and Magnus Skoog on drums. As far as the musical vibe, imagine mix of Thin Lizzy, Rainbow and Whitesnake and top that with the guitars of Van Halen and the energy of Aerosmith. I think any Classic Rock fan will appreciate Cormada and what they bring to the table. It's straightforward rock music that is heartfelt, and completely intense. Theirs is the sound of keeping a vintage torch alive through fresh blood and it translates with authority on tracks like, "Right In Front Of Me" "Caught In The Line of Fire" and "Love Sensation", but all tracks are good. If you are a fan of guitar based rock, Cormada delivers it in spades and 'Music For Generations To Come' is worthy of a place in your collection. If they can keep it together will definitely make their mark, big time. Enough said, pick it up and be amazed by Cormada's classic rock sound.  - Tony @ The Dedicated Rocker Society

Posted by Dedicated Rocker Society at 9:18 AM No comments:

CD REVIEW: ON SAFARI by Ulysses 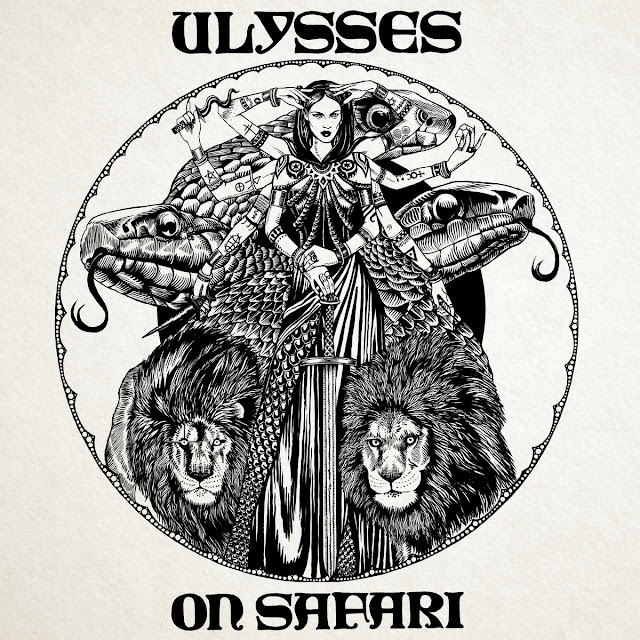 ON SAFARI by Ulysses
(Independent Release)

UK rockers Ulysses return with latest slab of rock and roll goodness in the form of, 'On Safari', a very energizing and contagious album loaded with songs that will get your rock and roll juices flowing. The band is comprised of, Luke Smyth of vocals and guitars, Denny Peppers on backing vocals and guitars, Jimmy Peppers on bass and backing vocals and drummer, Shane Maxymus. The new album is yet another fine example of Ulysses' prowess in true rock and roll form. I have listened to this band morph over the years without losing their way. Ulysses are so entrenched in solid rock and roll they are never persuaded away from delivering outstanding musicianship, great lyrics, endless energy and solid vocals. A rock and roll band that play rock songs that are loaded with catchy hooks and stomping, sing along choruses. As they prove on tracks like, "Doctors And Nurses", the lead off single, "Dragons", "This Useless Love" and a personal favorite, "Bad Tattoo". After listening to a band like Ulysses, it would be hard to not imagine this band fitting perfectly in the 70's Glam scene in the UK playing the stage along such giants like, Slade, The Sweet or The Sensational Alex Harvey Band.  This band is something truly special. Every now and then, just when you think music is dead, or at least on life support, a band comes along and gives you hope. I highly recommend to anyone who loves rock and roll music to listen to Ulysses, fall in love with them and pick up their back catalog too. Here's to the Ulysses for another job well done! Cheers! - Tony @ The Dedicated Rocker Society
For more info on Ulysses, please check out:
http://ulyssestheband.com