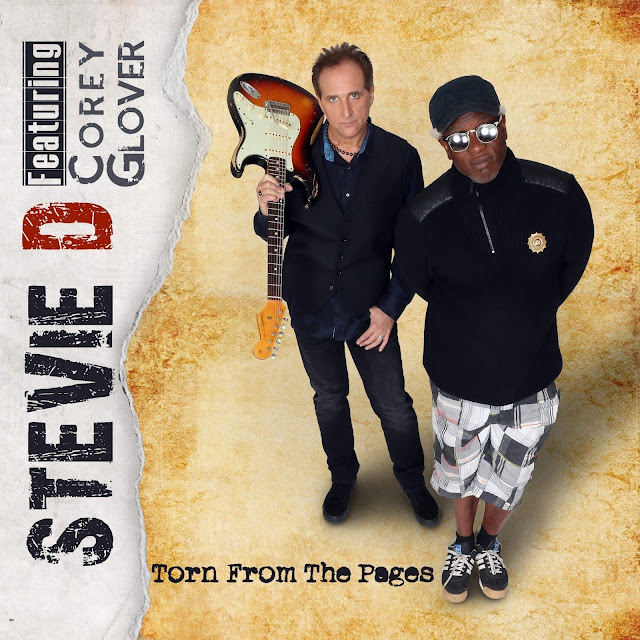 Having worked with artist like, Vanilla Fudge, Vinnie Moore, Pat Travers, Carmine and Vinnie Appice, Punky Meadows, and Cyndi Lauper, Stevie D. steps out from behind the console and offers up his debut album, 'Torn From The Pages', a album that's been a long time in the making, according to Stevie. The album also features veteran singer, Corey Glover from Living Colour. Together the duo have put together an amazing album that just grabs you and doesn't let go until the last note. The most intriguing thing about this album to me is the powerful and soulful vocal performance that Corey Glover turns in. His voice is a mixture of raw and soulful emotion that hits you like a left hook. The chemistry between Stevie D. and Corey Glover are a match made in heaven and it can be heard and felt throughout. Right off the bat, Stevie and Corey don't pull any punches as the first two tracks that open the album with, "Your Time Has Run Out", and "Wake Up Call" blasts out your speakers like a shot of adrenaline setting the tone of the listening experience that awaits. The lead off single, "Final Resting Place", is up next followed by the slow bluesy swagger of, "Strung Out", from there, it just gets better, trust me, with tracks like, "Soul To Stone", "This Is The Time and the album closing instrumental soul mover, "Facepaint". The album is just so good! Showcasing the veteran  savvy and prowess that only these two can bring and believe you me, they BRING IT!. I can't say enough good things about this album. Play it loud, play it front to back, and enjoy!Talk about capturing lighting in a bottle. -Tony @ The Dedicated Rocker Society
Posted by Dedicated Rocker Society at 11:04 AM No comments:

CD REVIEW: NOTHING BUT WILD by The New Roses 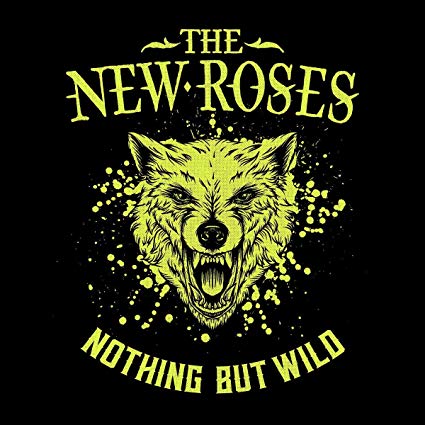 NOTHING BUT WILD by The New Roses
(Napalm Records)

You need neither an instruction manual nor a university education to love what the German based rock band The New Roses bring to the table. If you haven't listen to The New Roses, you are missing out on straight up rock on roll. As the band crank up and dish out on their latest release, 'Nothing But Wild'. Just as the band delivered with their previous outings, the songs on the new album hit the listeners' senses and immediately take root in their hearts and souls and will force them to move along to the rhythm. Amongst the brilliant tracks are 'Soundtrack Of My Life", "Can't Stop Rock & Roll" allowing Timmy Rough to show off his vocal talent. The magic of Norman Bites' guitar work shines out on the lead off single, "Down By The River", "As The Crow Flies" and the album closer, "Glory Road". amongst others and the powerful and groove laden bass playing of Hardy and the crisp, driving drums of Urban Berz generate the excitement across the whole album. I though it would be a tough task for the band to surpass the greatness they created on their previous album, 'One More For The Road' but this album hits the mark. It's rock 'n' roll music in its purest sense.. An homage to what rock music used to be like. The production is clear without sounding too sterile and you get the feeling the band is playing the music they love. If you have been a fan in the past this album is a must have. If you are just beginning to check this band out, this album would be a greet place to start. The New Roses are the real deal and never disappoint. Get the album, press play, crank up the volume and hear and feel it for yourself.  .- Tony @ The Dedicated Rocker Society
Posted by Dedicated Rocker Society at 4:12 AM No comments: 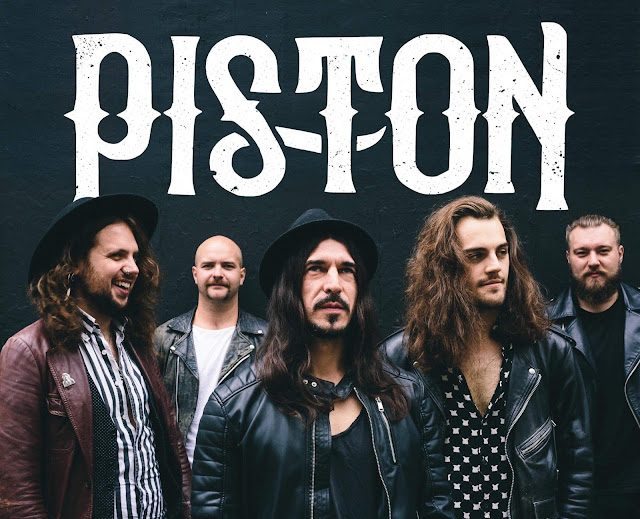 High tension blues rock comes to us in the form of UK based blues rockers, Piston. The band's self titled debut outing is a swagger filled blend of well seasoned musicians and top notched songs. Songs that are driving, intense and unrelenting. Piston is comprised of, Rob Angelico on vocals, Jack Edwards on guitar, Luke Allatt on guitar, Stuart Egan on bass and Brad Newland on drums. Together these lads have truly put together a strong recording. It doesn't have a dud on it. You can play it straight from beginning to end without wanting to skip anything. My favorites are "Rainmaker", "One More Day", "Beyond Repair", and "Into The Night".  The band are so tight its frightening and Rob's voice really stands out from other singers. He's exactly what you want in a rock n roll vocalist, powerful gravelly vocals, like a modern day Frankie Miller and Otis Redding combined. Yes their sound may be influenced by the classic rock legends that came before them but their sound is all their own.  An incredible debut outing from this amazing British rock band. Blistering blues rock music that begs to be played at maximum volume and  a strong reminder that a great rock and roll music is alive and kicking! .- Tony @ The Dedicated Rocker Society
Posted by Dedicated Rocker Society at 9:00 AM No comments:

CD REVIEW: NOT READY FOR THE PARTY by NORM (Nature Of Rebel Minds) 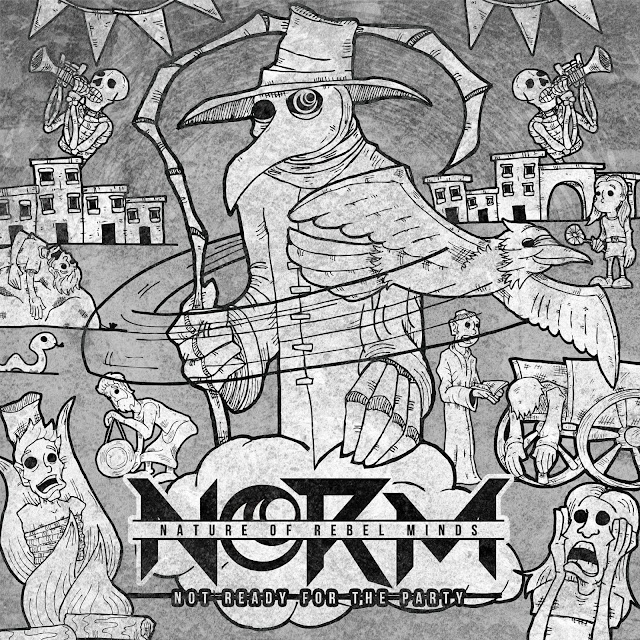 Hailing from Winston, North Carolina, the quartet in NORM (Nature Of Rebel Minds) are one the brightest rock talents to emerge from the Tar Heel state. Nick Branscome on lead vocals and guitar,  Austin Blakleon guitar, Austin Needham on bass and  Koury Pounds on drums and vocals. The band's debut, 'Not Ready For The Party', is a solid recording that is authentic with loads of swagger and attitude. Bringing elements of alternative metal, hard rock, and some grunge into a volatile mixture that will certainly please most rock fans. The band make it perfectly clear once you press play, they are here to rock your ass off, and certainly the songs on display here are pure evidence of that fact. The anger seething in the song "Wicked Lady" is a irresistible slice of catchy hard rock that goes for the throat. Other rockers sure to satisfy are, "Not Ready For The Party", "Genocide", "Beyond The Grave" and "There Will Be Blood". All the songs on this album showcase good musicianship and alienating themes we can all relate to...but it's ultimately the music that wins us over in the end. While there are undoubtedly influences of many different kinds of music genres in the band's sound. I find their music to be decidedly their own and consistently some of the best and most unique rock and roll out there. 'Not Ready For The Party' is an impressive debut from NORM. If the songs on this album are any indication of their future direction in music, their next album should be one of the most eagerly anticipated releases to lookout for.. For now, we have this highly enjoyable debut to rock out to.- Tony @ The Dedicated Rocker Society
Posted by Dedicated Rocker Society at 11:24 PM No comments:

CD REVIEW: THE ALTERNATE ME by Fiction Syxx 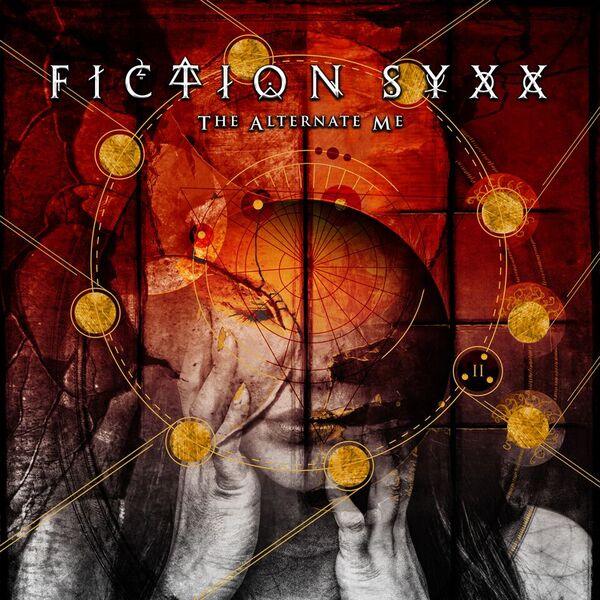 THE ALTERNATE ME by Fiction Syxx
(Melodic Rock Records)

Proving that the first time around was no flash in the pan, Fiction Syxx return with a powerful follow up to their debut outing, 'Tall Dark Secrets' with, 'The Alternate Me', featuring a great selection of songs that will stimulate the senses and keep you coming back for more. Everything about this recording is solid from the songwriting, production, vocals and energy. Courtesy of, Mark Allen Lanoue on lead vocals and guitar,  JK Northrup on guitar and backing vocals, Larry Hart on bass, Eric Ragno on keyboards and Rory Faciane on drums. On this sophomore effort the band  serve up a deep, thought-provoking listening experience. I really love the flow of these songs. There is nice mix of styles, a nice mix of tempos and no excessive instrumentation. In so many words, this is a compact, yet explosive set of songs. Highlighted by tracks like, "My Darkest Hour", "Monster In The Mist", the title track, "Tall Dark Secrets" and two great covers, the Styx classic, "Suite Madame Blue" and the Uriah Heep classic, "The Wizard". Overall, an incredible album, written and performed by a band that is insanely talented. All the power, passion that the band impressed so many with their debut is taken to a whole new level here. Simply put, 'The Alternate Me' by Fiction Syxx is a BEAST! - Tony @ The Dedicated Rocker Society
Posted by Dedicated Rocker Society at 9:52 AM No comments: